We are all in search of that illusive golden Maccas fry… Figuratively and literally. So when Klaus asked me to slap some new art on his skateboard I thought “It’s a stretch, but I think we can make it work.”

To be honest, I really just wanted to draw a seagull eating Maccas fries as the image resonates so strongly through my childhood (along with the ibis and my chicken nuggets, but that’s a story for another time)… Klaus had just watched Gleaming the Cube so he wanted a “Skate or Die” on it… and then nature just took its course.

P.S. How’s the fake wood lino in my kitchen? 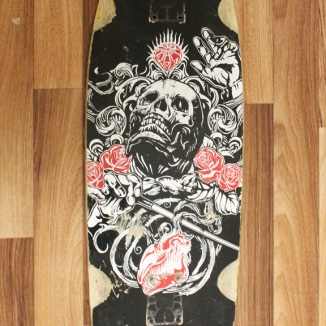 Upon my return to Sydney, I was commissioned to do a mural in the Universal Magazines office in Sydney.  Let’s not waste any time getting to the time lapse of the project….

Now to backtrack… As the client was not keen to have an enormous animal or two sprawled across their walls (as I most certainly would have done otherwise), the concept sketches, (based on the broad ideas of paper, inspiration and spreading ideas) looked something like this (made a gif to keep things jazzy):

Just on the edge of China Town in San Fantastic-rancisco is a tech co-op space called The Vault. It’s underground, it’s full of computer-bound entrepreneurs, and it’s on the old site of the famous Ghirardelli chocolate factory (circa 1863). That’s right, this one’s an antique.

As nobody in the space seemed to have the foggiest idea of the place’s historical significance, the community manager (SO MANY STARTUP WORDS) decided an old advertisement for the chocolate factory would be the perfect fit for the reception area’s mural. Only problem was that I’d never actually done any text on a mural – ever… And as this was more of a ‘replicate and exaggerate’ sort of job, I needed to be a little more planned/precise/particular about how I would get this thing up on a wall, rather than just freestyling it as I usually do. It was also to be on a grey wall and using only black paint, unlike my standard bright colours – so I managed to pull the ‘artist’ card and bargain a bit of gold into the equation too.

The whole thing was rather a trendy sounding idea.

So I did a bit of photoshop work to see how it could be placed, fused the advertisement with some doodles from an old Ghirardelli sign that I liked, projected it on the wall, slapped some masking tape on the straight line edges, and got hectic with the black paint. When I say hectic, I mean as precise as possible. (Neck pain for days. I’m fine now though, thanks Klaus for the amateur chiropractic work.)

I did have to take some liberties with the text as the blocky resolution of the projector proved to be only adequate for a rough guide. Anyway, once it was all done, I had intended on gold leafing just the shadow of the heading (as planned, and shown in red on the projection). Needless to say, that freestyling side of me came out in the eleventh hour, and significantly more gold leaf ended up getting chucked on the wall. Which I’m stoked about, because not only does gold leaf look like Willy Wonka’s golden ticket, it is also just basically extremely epic.

I have been breathing out gold leaf dust flecks ever since, like a mythical creature. Note to future users of gold leaf: probably wear a respiratory filter unless you plan to attend some sort of dungeons and dragons convention every day for the rest of your life.

Fused together and shadow added

Photoshopped to see design in the reception space

projected into the space 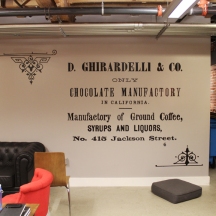 All black everything aka murdered out mural 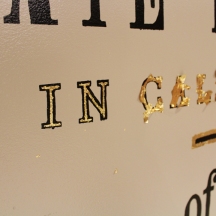 Gold not as planned

dangly gold floating in the air! 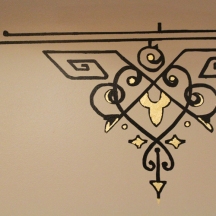 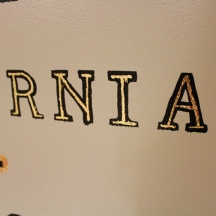 I had not planned to attend Burning Man this year, although I’d considered it and ruled it out. So in a massive yes-man move, I accepted my architecture client’s offer of a ticket on the Saturday (as he was the only person I really needed to work for that week) and drove out with a 16-year veteran (nice to meet you Glenn!) and my megapal Katie (who took the above photo) late on Sunday night.

I won’t go into the whole thing too much, but suffice to say that I had the opportunity to play the flute for a herd of cows on the way out to Black Rock City (life highlight) and the week maintained that standard of epicness throughout.

After painting several people and items of furniture (clearly all of which were ill-documented), I noticed a mate in my camp, Rowan, assembling a cart to pull some speakers behind his bicycle for that night. All the time in the world on my hands at that point, I offered to paint it. Playa landscape inspired.

In the spirit of what is truly an inspiring festival of fleeting art, it only felt right for the work to be completely transformed by the environment, come morning. What I’m trying to say is that it was completely buggered, but that was cool. 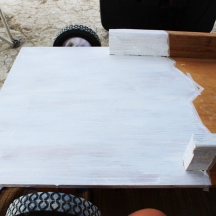 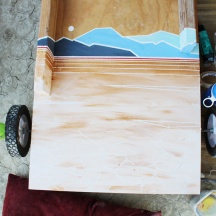 left the camp looking like this (plus speakers, etc)

then it spent the night/morning in this… 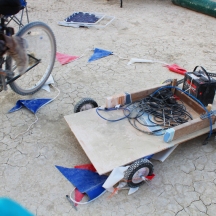 and gave me the artistic satisfaction of this 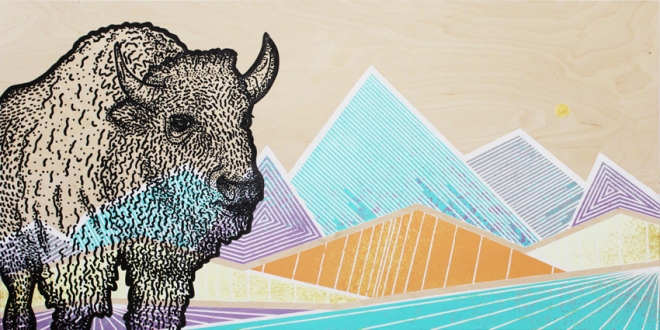 The portable piece to match the Flatiron mural is complete! The background is an abstraction of a section of the Colorado Rocky Mountains, and creeping in from the left there is an American Buffalo/Bison. The ‘canvas’ is birch wood (takes me back to my architecture university days of model making!), so it took a little bit of extra priming. Big ups to Klaus who collaborated with the taping, geometries and colour advisory… And also helped me with the opening gag for this post.

Let it be known that the proceeds of this work is directly funding the software with which I’m writing my next screenplay. Literally, art for art’s sake. It’s like that movie ‘the human centipede’ – except without all the people dying. Maybe it’s more like an arty ecosystem. I think I should buy a felt hat. Or grow out my armpit hair.

Did I mention the house this work is for is in an area called Cow Hollow? Bovine coincidence? I think not.

Wait! I’ve got one more:

Q. What did the buffalo say when his son left for school? 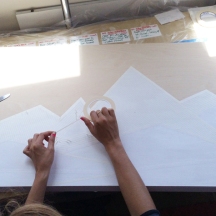 Prime then tape. This project clearly took priority over the screenplay I’m mapping out on those system cards underneath the plastic! 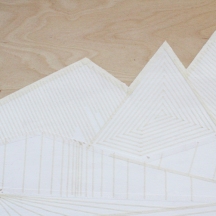 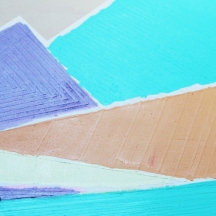 I was commissioned to paint this mural for a house in Cow Hollow. The request was for the image of a Bison as a tribute to Boulder, Colorado (and which I also thought was appropriate considering the mural’s location).

Enlisting Klaus, we set about taping up and painting an abstract version of the Flatirons rock formation for the background. I then-

Nope. No, I then did nothing else.

I intended on drawing a giant Bison on this chunk of dining room wall, but never got the chance. It seems our patron was so pleased with the work, that he wanted us to leave it as-is, and paint him a separate artwork that is in keeping with the theme, but one that he can also take with him when he moves out of the house one day. How good is that? Keep ’em peeled for part 2! 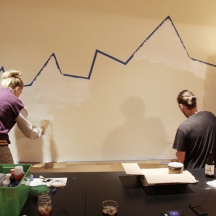 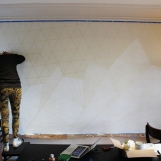 Somehow we managed to cut all the right bits, without error! 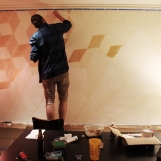 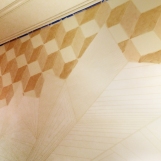 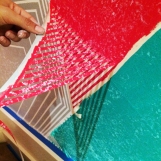 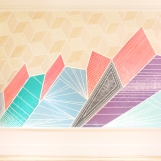