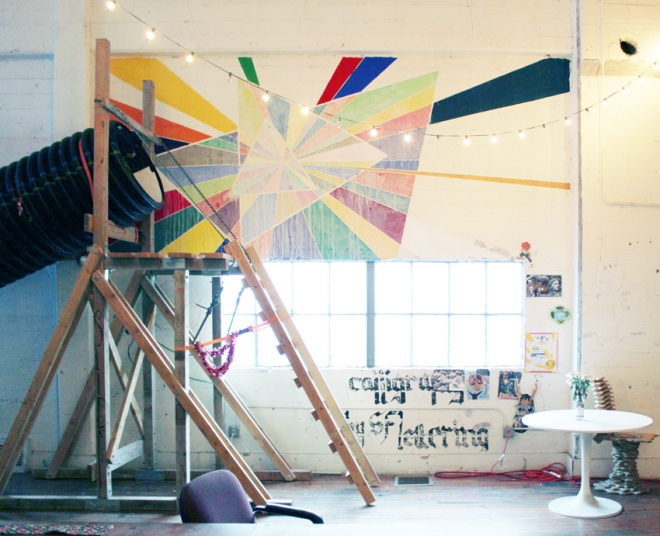 So I vanished from the interwebs for a couple of weeks – and for good reason, well three good reasons. The foremost being: I had no computer. Why? Well this mural above is largely at fault. So am I, but I would certainly prefer to put the blame on something inanimate who will wear it with far more grace than me. Yes – I was painting this mural with Klaus at [freespace] with my car parked out the front (“who parks a car in SOMA?!” – says everyone after the fact.) and my window got smashed, my trunk opened and my laptop and camera gear (among many other things) were flogged.

This is just a symptom of me being a huge noob in San Francisco. Yep, it’s a learning curve. Turns out everyone I mention my tale of woe to has had something stolen from them within the last year in this city. Most of them not lucky enough to have travel insurance and to end up with a faster-than-Usain-Bolt, higher-resolution-than-real-life, brand new macbook pro. Like moi. What a smug little bastard. There it is again. Lemons to lemonade. I do still find myself sans a decent camera, but that will come.

Anyway – the half-finished mural. It’s a collab with Dr Klaus again (although my mum who was in town last week (WHICH WAS EXCELLENT) did have a hand in mixing some colours for us) and there’ll be some ink on top. Perhaps the dripping whitewash will give you a clue…

… Okay the suspense is killing me. I’m thinking of drawing a cow on it.

We also did these posters that will be cut in half, branded and gifted as thank you’s for the good people who donated to the second month of [freespace]. We taped up some poster paper and when choosing colours, I suggested “let’s just do the whole thing gold”. No objections from Klaus.

In retrospect, the Dr Klaus/thedarclaud mural style may have been ominous – looking like smashed glass and all, one might say we predicted the theft from my car, Carlos. Which would make us clairvoyant. So my next post may be just purely tea leaf-based art.