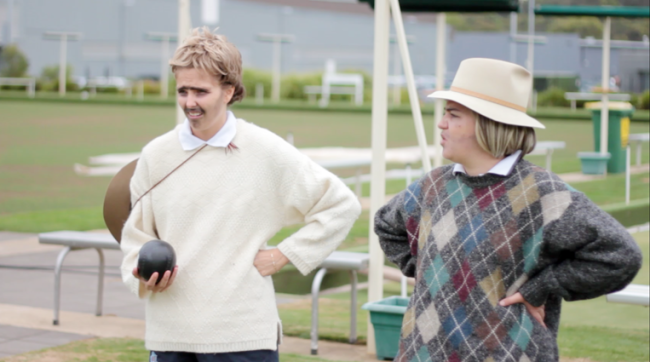 What a coupla babes.

Righto, so sometimes my mate Prudence Vindin and I like to dress up as old blokes and have a yarn. Today’s vid was shot last time I was in Australia over the new year down at my local RSL’s Bowlo. Keith and Kev, two old buggers originally discovered while shooting Wookie Error, had such a warm reception among our mates that we decided to give it another burl.

Pru and I have been nominated for our Heaps Funny Shorts blog (which contains a plethora of videos such as these) in the Pedestrian.tv Blogster awards. Give us a commitment-free like and we’ll be forever in your debt.

I finally got time to edit it between a multitude of social and less-social engagements and my newly acquired gainful employment which involved a hell of a trip to Canada to get my visa (hurricanes, cancelled flights, lost passports, evacuations, the circus that is Niagara Falls…) but I made it. So the content’s coming out a little slower now that I’m ‘getting that cash’ as an architectural designer, but on the horizon lurks yet another mural, more illustration, and a ton of videos.